Chemical plants depend upon a continuous mass flow of their raw materials and final products from input storage to output storage.  When the materials are gases or liquids, the storage areas are known as a “Tank Farms”. Efficient storage requires increasing the mass of gases through compression and liquefaction.  Tank Farms are usually made up of three different types of storage tanks which are Pressure Tanks, Cryogenic Tanks, and Atmospheric Tanks. 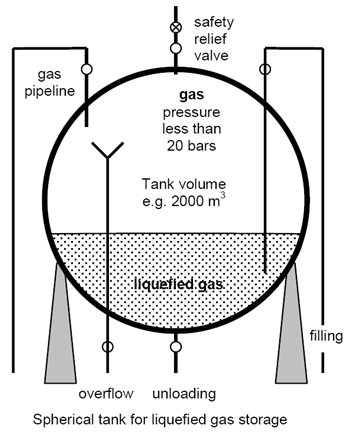 These are mostly cylindrical or spherical tanks. Spherical tanks have an excellent surface/volume ratio and ensure homogenous tension load. Because of this, the wall thickness may only be half of the cylindrical tanks. However, a disadvantage is due to increased height is they cannot easily be installed underground. Big spherical tanks are used for pressures up to 25 bars (vapor pressure of the liquefied gas) where a lot of gases can be kept in the liquefied state requiring a much lower volume than the gas itself.
Pressure tanks are equipped with level indicators with alarm trips along with temperature sensors to continuously measure the interior temperature and activate a cooling sprinkler system in case of a temperature alarm. 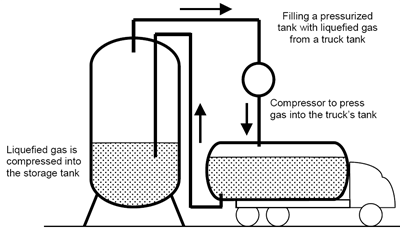 Tank filling is by two connecting tubes; one for the gas and one for the liquid. The gas is drawn out from the storage tank a compressor pressurizes it into a tank truck. This pressurization then forces the liquefied gas back into the storage tank. This is a potentially dangerous process especially while making the necessary tube connections. Gas leaks can occur and gas detection is highly recommended. The most common gases stored pressurized tanks are ammonia, chlorine, and LPG.

When the liquefied gases have a vapor pressure above 25 bar the containment systems have an increased danger risk. In this case, Cryogenics is the method for obtaining the liquefied gases: Cryogenic means cooling the gas below its boiling point results in liquefaction.

Cryogenic tanks require a complex cooling system and are therefore more expensive than pressurized storage tanks. However, cryogenic tanks are also safer since liquefaction occurs at atmospheric pressure. The combination of pressurized and cryogenic containment techniques are quite common.

More and more gas stations and truck stops now have cryogenic LNG storage tanks to support LNG powered vehicles. Gas detection is very important for this application since LNG is odorless and invisible. Odorants the utility providers commonly add to natural gas cannot be added to liquefied methane. Low temperature cryogenic tanks are heavily insulated and much of their volume is insulation only. These tanks contain liquefied gases such as argon (- 186 °C), ethane (- 88 °C), ethylene (- 104 °C), helium (- 268 °C), methane (-161 °C), oxygen (- 183 °C), and nitrogen (- 196°C) at temperatures near their boiling point and atmospheric pressure. Besides oxygen and nitrogen, ethylene is one of the most commonly used products world-wide and many tank farms store ethylene which should be monitored with gas detection.

Atmospheric tanks are used for materials which are liquid under normal conditions. Typical atmospheric tanks are used for flammable liquids (e.g. methanol, toluene, xylene), and hydrocarbon mixtures (e.g. gasolines, kerosene) produced in the refineries. Atmospheric tanks normally have wall thicknesses supporting filling pressures only up to .1 bar above atmospheric pressure. Loading and unloading of tanks with a fixed roof cause pressure differentials and require relief valves with breathing to the ambient atmosphere. Atmospheric breathing is through flame arrestors to avoid flash-back into the tank. Vapors may also be fed through flame arrestors to a flare system and sometimes they are re-condensed. Since the vapor pressure of liquids is lower than atmospheric pressure, there is an inert blanket of nitrogen (or other inert gases) added so there is always a small over-pressure against atmosphere preventing air access into the tank. Tanks with roofs floating directly on the liquid surface are also sometimes used.

Is the gas detection system needed for bulk storage of toxic and/or flammable substances, liquefied or pressurized? National laws and regulations require high safety standards when the amounts of dangerous goods exceed a given limit. NFPA says: Continuously monitored low temperature sensors or flammable gas detection systems shall sound an alarm at the plant site and at a constantly attended location if the plant site is not attended continuously. Flammable gas detection systems shall activate an audible and a visual alarm at not more than 25 percent of the lower flammable limit of the gas or vapor being monitored. (NFPA 59A, Standard for the Production, Storage, and handling of liquefied Natural Gas(LNG), Chapter 12.4.2 Gas Detection)

Tank farms require gas detection primarily for explosion protection and early leak detection. Explosion protection means tripping alarms at concentrations of 20% to 40% LEL and promptly activating countermeasures at the site (informing operators, technicians and fire brigade) and/or switching countermeasures (closing solenoid valves, activating cooling showers, water sprayers). Tank loading and unloading might be accompanied by large leaks when connecting the appropriate pipes to tank trucks. Early leak detection is accomplished by detecting and alarming at lower concentrations (e.g. 10 % LEL). Even with temperature and pressure gauge sensors, small leaks (hairline cracks) are difficult to detect without gas detection. However, over long periods these small leaks mean costly loss of product and may even become a large leak with hazardous consequences. Tank farms must have a safety distance between the tanks in case of a fire, the probability of affecting adjacent tanks is minimized. Some applications even strip out the cooling water to monitor for dissolved flammable, e.g. ethylene.