Many industries, including petrochemical refining, cold storage, and food processing, rely on large-scale refrigeration systems for their day-to-day operations and ammonia is the most common choice of refrigerant. Household ammonia products that most of us are familiar with are ammonium hydroxide (water-based). However, since water freezes, refrigeration-grade anhydrous ammonia (free of water and impurities) is required for refrigeration applications. Keeping the ammonia pure and free of water is extremely important for such systems.

What makes ammonia suitable for refrigeration?

What are the problems with using ammonia in refrigeration?

How are ammonia leaks detected early to prevent accidents? 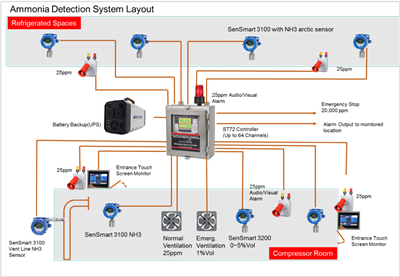